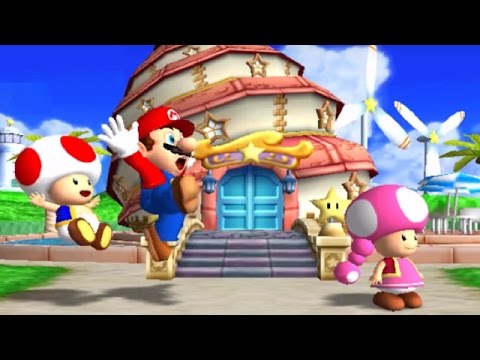 It is also known as Dancing Stage Mario Mix in Europe, and Dance Dance Revolution with Mario in Japan.

This video shows a full playthrough of the Story mode on the normal difficulty level.

For anyone that is (or was) a fan of the arcade smash-hit music game series, this is an awesome combination. It takes the overworld and story scenes from the later Mario games to create a structure for DDR gameplay in the Mushroom Kingdom. It runs using a modified version of the engine that Mario Party 6 was built on, and you get the same excellent quality cutscenes and graphics as that game featured. So, it’s a Konami-developed game running on an engine built for Hudson-developed games and it’s published by Nintendo. Confused? Don’t worry – it’s Mario and it’s DDR, and it’s an amazing combination. A lot of effort in particular was put into the animation, and all of the Mushroom Kingdom denizens dance extremely smoothly and surprisingly not all like tools. Mario’s gut doesn’t seem to get in the way too much!

The game is broken up across five worlds, and has Mario (or Luigi) and Toad in search of a set of keys. The actual plot itself is about the same level of substance as the typical non-RPG Mario title, but the dialogue really shines. There are some absolutely hysterical exchanges between Toad and the bad guys, including Bowser, Wario, and Waluigi – more than once the absurd writing had me laughing out loud.

The gameplay is pretty typical of any DDR game, but it does throw in a couple of twists. There are item shops to buy things that can alter the course of battle, and in the boss fights there is usually a mechanic introduced to attack with, like stomping a squid’s tentacles, or deflecting Potobos and Bullet Bills. There’s even a jump to the top of the flagpole mini game!

And finally, there’s the music. The great majority of the tunes are heavily remixed themes from various Mario titles, and the remainder are classical tunes that fit in pretty well alongside the rest.

DDR Mario Mix is a complete novelty and a helluva neat twist for both series of games. If you like DDR or Mario, do yourself a favor and check it out!

Just be prepared, hardcore DDR fans – this is insanely easy compared to typical DDR games. Even on the highest difficulty levels (unlocked after successive playthroughs) the songs rarely go above what would be a 5 or 6 star difficulty rating in the mainline DDR games. Gotta keep it kid friendly, I guess, though I suppose it could also be something to do with the deemphasizing of euro-dance in the track list. It’s still a lot of fun, but don’t expect to break much of a sweat if Afronova on Maniac is your jam.
______
No cheats were used during the recording of this video.

NintendoComplete ( punches you in the face with in-depth reviews, screenshot archives, and music from classic 8-bit NES games!

Visit for the latest updates!