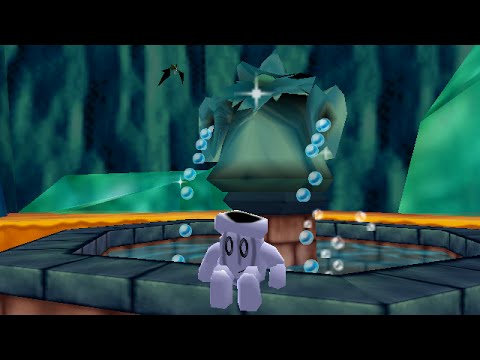 This underrated game is one of my favourites on the N64 and has some decent gameplay, very nice music and a unique style. The controls are inert, but this gives this game its particular charm. Thanks to re-recording I could keep a good pace and show fluent gameplay.
Though technically outdated for its time, it’s still superior to the Playstation version.
During the game I visited the bird on the swing to show some cheats, but I had no idea what the “secret cheat” is for. It has been found out that this particular cheat alters the targets in the carnival bonus game:

Recording this game was a real problem 😀
Due to lacking emulator compatibility I had to find some plugins that would emulate the game best. Nevertheless, I still had some shortcomings in the video:

– infrequent sound cracklings
– transparency of textures is displayed pink during cave levels, boss fights (except for the first one) and some video sequences. Especially the Frankenstein boss looks weird.
– In the beginning of the last Atlantis level as well as in the space-bonus-level, Glover and his ball lagged a bit.
– life counter gets buggy as soon as it gets the third digit
– other smaller video bugs (e.g. characters in the HUD and some sort of cuts on brushes)

Due to these reasons, World of Longplays rejected this longplay which is why it was uploaded on this particular Youtube-Account instead.
Thank you Frittenfett-Senpai! Screw you WoL…