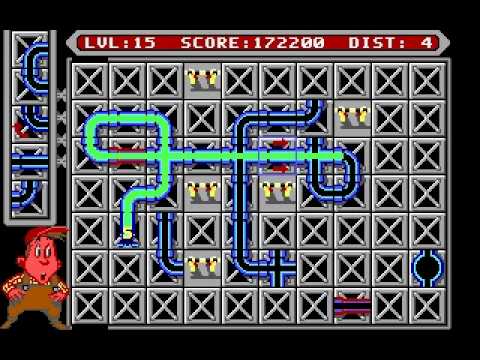 Pipe Mania is a videogame released in 1988. In this video I show some (bad!) gameplay. The goal is to create a pipe line longer than the distance shown in the upper right corner using the pipe pieces appearing in the left column (there is also an expert mode with two left columns, but in this video I’m playing at the normal difficulty level). The longer the pipe, the more points you get (and there’s a bonus if you make 5 crosses or more). Pressing F at any time will instantly Fill the whole pipe, as a Fast Forward or a Flood of some sort. I do this sometimes in the video.
Once again I’m playing a game from my childhood at least 2 decades after the last time (note that I was 4 in 1988) so if this gameplay sucks it’s because I am obviously rusty 🙂
Sometimes I wonder if I should practice with those games a bit before I upload a video on Youtube, but that would take away most of the fun 🙂

Note that at the end I try to enter “NINEKO :)” in the high score table, but the game doesn’t seem to support the smile (or maybe it’s just Dosbox enforcing some weird keyboard layout, even though I’m familiar with both the Italian and the American layouts and I’m pretty sure I know where the symbols are, so I’m inclined to believe that it’s the game’s fault).