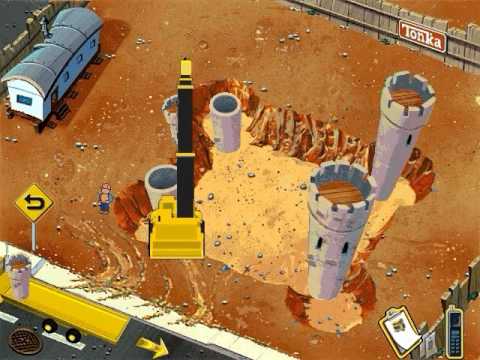 And here we have a redo of what remains my most popular video on this channel, Tonka Construction. I actually debated about this for a very long time, but it’s finally being done. My old walkthrough was insanely successful, well above my expectations. It did have several problems, though — namely, I ran it on my main computer. I had to do it as a last resort situation, and even though it could have been much worse, it has major problems running on a modern computer. The biggest problem was that shimmering glitch, which thankfully looked way better in the recording than it did in the game. I now have VMware, which fixed a lot of problems I initially had. It still has its share of problems (short sounds cutting off and the paint can/dropping rocks into the crusher suddenly not working), but it overall works nine thousand times better. I also skipped over several things in my original walkthrough — I never showed the instructions, the clipboard, or the credits. This walkthrough catches all of those. With all that said, let’s go level-by-level now.
Garage: This area always felt like the first area IMO, even though it’s probably the weakest part of the game. Maybe that’s why it is. I dunno, anyway, I will be showing all of the instructions screens for each of the areas, mostly because they have extra screens not seen in the regular explanations. In fact, the garage doesn’t even have any explanations. The clipboard will be seen later. I decided to stick with random colors because, well, I seriously have no idea how you can get creative with them.
Quarry: The rocks into the crusher glitch a lot on VMware, so I actually exited and re-entered off camera to fix it for the gold. I also uncovered the secret cave I never knew about until legoboy186 told me about it. It takes a ton of times to break down before you actually discover it.
Desert: I was hoping to get the “Pull my britches, this road is open! (throws hat)”, but I didn’t. I also didn’t get the “woah, you’re not fooling around!”, but that’s not much of a loss since I got that in my old one. I have little to say here.
Mountain: Thank goodness the snow won’t hurt your eyes this time. Don’t really have much else to say here besides that.
City: Everyone’s favorite part of this game, and for good reason. I put the same stuff in the same place, because quite honestly, I think it works best with that layout. I find it interesting that the skyscraper’s instructions mention several things that aren’t in the real game. According to it, you were actually going to place the podium and the mail box using the crane!
After that, we learn about the trucks and the credits. That’s basically this walkthrough in a nutshell.